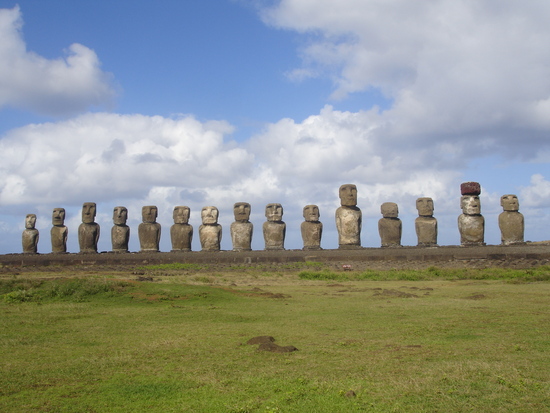 I walked along the green and brown grassy plains, while the wind wrapped around me. The view in front of me was magnificent, navy blue and aquamarine foamy waves constantly crashing into the rugged coastline. A coastline that seemed to go on forever – well I guess I was on an island! Isla de Pascua (Easter Island) to be precise, one of the most remote inhabited places on earth, some 3800km from the closest civilization. I wanted to stop and keep looking, take in the views slowly but something made me keep walking and then I saw him – Ahu Ko te Riku – one of the biggest Moai´s on the island noticeable by it’s red hat and white eyes. Impressed – most definitely and this was only my first day!!I have spent about 5 days on the island so far and there has been so much to take in and so much to see that I am still trying to decided between a number of things what my favourite place was and what activity I enjoyed the most? Was it…

Thinking @ Playa Pea
Aptly named Pea – it is probably one of the smallest beaches on the island. It became my haven for hours while I put my thoughts together so that I could share some of the magic of the island with you.

Relaxing @ Anakena Beach
Well you should all know me by now – if there is a beach around I will find it. Anakena is the most beautiful beach on the island, I spent the day relaxing either staring at the turquoise water or admiring the Ahu Nau Nau Altar – the best preserved alter on the island only for the fact that it was hidden for many years under the sand.

Driving @ slow speed
Maximum speed was 60km on the tar road and there is only two! I was lucky enough to meet some lovely people at the hostel and hire a 4×4 for the day. I drove around the island for about 8 hours stopping at some wonderful sites: Maoi, Ahu, fallen Maoi, volcanoes and beaches all the time giving ourselves enough time to take photos, explore and have lunch – far more than if we joined a tour for the day.

Taking Pictures @ Volcano Rano Raraku
Nicknamed the ´Quarry´ or the ´Nursery´, this is where it is believed the statues were built and you can still see many in different stages of development. My favourite part of this site was walking into the volcano to see the many undisturbed statues amoung the yellow flowers and of course taking lots and lots of photos.

Just looking @ Ahu Tongariki Alter
The most well known or photographed alter, standing tall with 15 statues. These remarkable Moai´s have twice been toppled in their life time – once during inter-war fighting and then again when a tsunami hit the island. You must admit they are in pretty good shape for taking such a beating.

Exercising @ Volcano Rano Kau
Taking a 1½ hour walk along the coast and through many trees up to this Volcano was great exercise. All made worthwhile by the beautiful view – a blue and green crater reflecting in the sun.

I have not mentioned everything on the island you will be pleased to know! There are about 900 Moai and 270 Ahu´s scattered around the coastline and judging by my photos I have done a good job in trying to snap them all. Probably it was a good idea not having captured them all but I will definately be leaving this spiritual place feeling relaxed, content in knowing that I have experienced all the elements the island had to offer. But it will seem that I will still be leaving the island asking myself one question – Why do all the statues face inland? 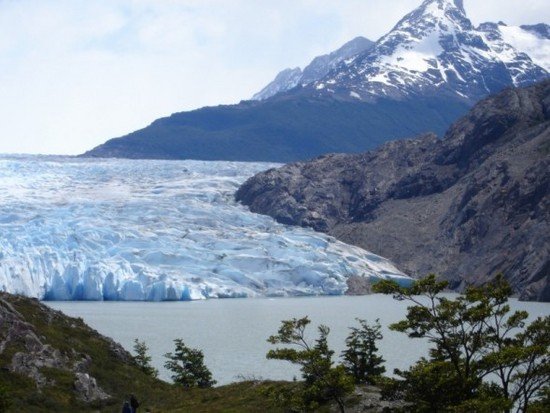 There is not too much I can say about my four days stay in Torres del Paine, other than the sheer beauty of the landscape and the fact that every morning I got out my tent to the wonderful mountain views could not be matched. I got to do 2 amazing walks on the famous W route – about 20 and 24kms each and although the one was a really tough climb, up massives and massives of boulders the view at the top was just amazing.

I do hope that my photos do justice to what I have experienced. 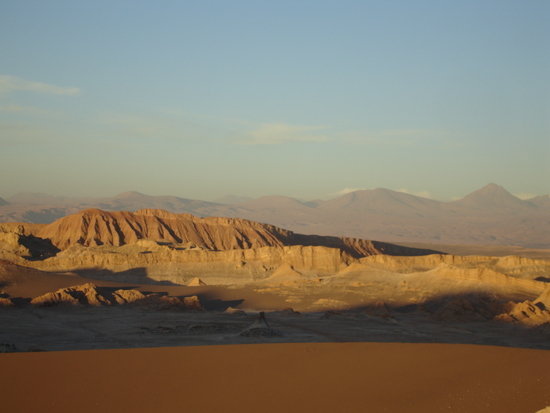 To arrive in Chile from Bolivia was just a totally different experience – From feeling like a dust ball on windy dirt roads we crossed the Bolivian border and within 20 mins we hit tarmac roads (roll on smooth travel). I thought Chile very much more in line with a first world country with shopping malls and petrol stations with toilets. (Very exciting as I was starting to get tired of hiding behind bushes on long journeys.)

Our first destination was San Pedro de Atacama, which is situated north of Chile in the Atacama desert. It was extremely hot and probably reached 40 degrees some days. It had a great vibe with lots of wine bars that we could sample some great Chilean wine. It was here that I visited my second moon valley, based in the desert it pretty much looks like the moon with odd craters and markings. I spent the afternoon exploring and staying for the sunset at the valley which was absolutely beautiful. I had to climb to the top of the sand dune where the wind whipped the sand around but the effort was well worth it!

In the evening I visited the local observatory to see some stars and being my lucky day I even got to see Planet Mars. Atacama is known as the best place to see that stars and I must admit I have never seen so many stars in the sky at one time it was just beautiful (I also enjoyed the hot chocolate at 2am after standing out in the cold).

Before leaving this real quirky town I made sure I visited the local pool for some cooling down and in preparation of the next two days of travel…The first night we bush camped in the middle of the desert near El Mano de Dieserte and had the most fantastic party under the stars…this has been rightly named on tour as Disco Desert. The second night we camped on the beach at Azucar de Pan after getting the local fisherman to take us in his boat to see the local penguins, sea lions and pelicans.