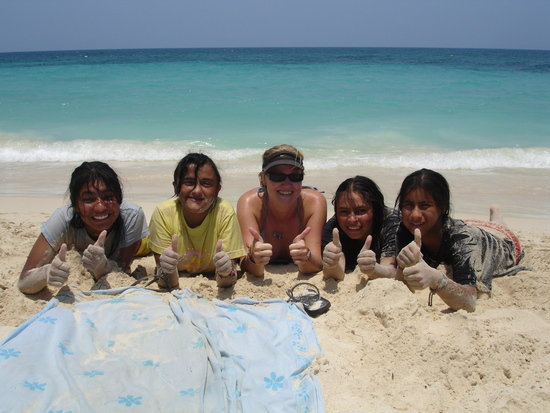 I fell in love with Colombia the moment I landed at the airport. Strange – yes, but everyone was so friendly and full of smiles that it was hard not too – a total contrast to the Venezuela.

I caught a connecting flight from Bogota to Cartagena, a beautiful colonial town where the warmth of the people is highlighted together with earthy tones of mustard, terracotta and pine green painted houses and shops. You could certainly get caught up for days wondering the streets, indulging indulging in numerous cups of coffee in the many plazas but a trip to Cartagena is not complete without a visit to Playa Blanca – (translated as White Beach.)

To reach Playa Blanca you can take the tourist route by hopping on a boat for about 15,000 CO Pesos each way but what they don’t tell you is that you can also reach the beach by taking the bus from the local market. This would be the local peoples` preference as it is obviously cheaper even though it is a longer journey.

I was more interested in riding along with the locals to the beach so four us decided to hop on the bus and see where it took us. It was not too straight forward – it took a bus, a ride on a ferry across the river and then another bus along a windy, sand road. I was at one stage wondering if we were indeed heading for the beach but decided that because everyone seemed really happy and having fun on the journey that if we did not get to Playa Blanca then at least it would be an interesting place.

I was not too be disappointed as I was greeted at the end of my journey by a exquisitely beautiful white sandy beach and a calm turquoise and blue sea – I certainly felt like I was in heaven. As it turned out the day got better and better the longer I lay on the beach.

I have tried to capture some of my journey on video so that you can too experience what I did – it is not the greatest footage as the road was extremely bumpy. It should have taken us about 1½ hours to get back to the city but as we had a mini breakdown (typical in South America) it took us closer to three hours.

I could not complain as the entertainment was first class and a typical reflection of the Colombian people. My perfect day extended into the night with our new friends as we joined them in having a drink and a lesson in some new salsa moves.