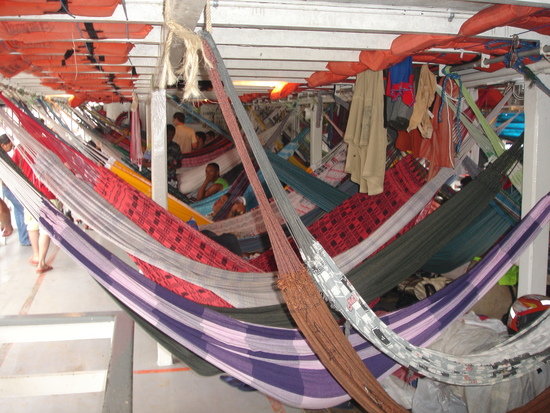 Described as an experience and a half, it was something I was dreading but in some crazy way getting excited about. It would also be (I kept telling myself) a great local experience to be living, eating and sleeping with the Brazilian people – no chance to go back to the safety of a hotel, hostel or tent. Prepared with hammock, snacks, water and other drinks I was ready for my three nights and four days on the river with about 150 local people…or was I?

Having put up my hammock up the day before leaving, it seemed somewhat spacious even though the 13 of us had to place our hammocks rather close and I mean arm to arm. However upon arriving the next day the 2nd deck was covered in an array of colours – there must have been 80 – 90 hammocks of all different sizes strung from beam to beam. We had to get our fighting hats on to protect our space, as the local people constantly tried to fit one more hammock amoung ours – Crazy.  Limited Portuguese was a definite disadvantage but soon the international sound of huffing, puffing and tutting started to work its magic.

I was a bit apprehensive about what the food would be like on the ferry especially as the guidebooks all say that you receive brown rice (only brown as it is cooked in river water) and beans. I was pleasantly surprised as we all piled in shifts of 10 into the dinky dinning hall that the food was rather good – yes I had beans and rice but it wasn’t brown looking rice and included some delicious beef , salad and potatoes served a different way each day.

I enjoyed some good sunsets on board with a couple glasses of vino and watched and listened to the local people including children sing and dance to the constant music that played on board. The first night however was pretty much restless and I am sure some bruises will be appearing as I was elbowed in the cheek, hit on the head, sat on and kicked in the back. I did eventually go to sleep only to be woken at 5am with more people coming on board and of course a lot more hammocks!! Let me just say the trip to the bathroom was not just a colourful affair but also meant a lot of ducking and crawling.

After three nights we docked in Manuas at 2am in the morning and carried on sleeping till they kicked us off at 6am. If I had to sum up my time on board it was something that I am glad I did not miss, of course I thoroughly enjoyed my first shower in three days but I would give that all up again in order to share and experience once again this time with the Brazilian people and their way of travelling. I do also think we got extremely lucky with our ferry and maybe if the boat was a lot more packed I might not be singing in the same tune!