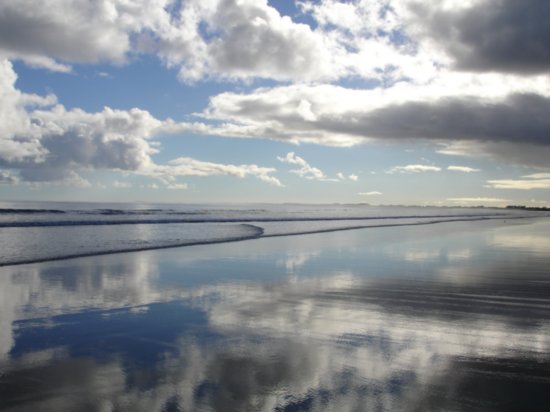 The camper van was booked and I must admit I was very excited about it being my home for the next four days as my friend, Angie, and I made our way up north to explore the ‘Twin Coast’ or the Northland as it is officially known. Our little van (which I will refer to as Nomad) was well cozy and came equipped with fridge, stove, kitchen sink, bed and a portable heater. The main selling point being the heater as the nights were a bit chilly but sadly we found out on our first night that it just did not want to work – at least we had our snow chains so we would not get stuck anywhere for too long!!

We started off by making our way along the west coast which was made up of beautiful coastlines, narrow and windy roads and Kauri Forests. It was a long drive as we wanted to get as far north as possible but we still made time to see the famous Kauri Tree – Tane Mahuta – wow it was tall! We did not get to see the pet dolphin at Opononi but we witnessed a sparkling sunset across the ocean as we headed to Rawene for our first night stay.

The excitement of reaching 90 mile beach in less than an hour got us up bright and breezy to catch the 7:30am ferry. I am sure the surroundings would have been spectacular but as it was so misty we could not see a thing but things soon changed. The views on our drive were spectacular as we followed rainbows in the sky and watched the mist lift eerily from the ground. I was not too sure how many times we would turn the corner and see yet another amazing view before us, but for sure the words ‘wow’ never tired from leaving my lips.

Our stomachs were grumbling by the time we reached Aripara, so we made ourselves some toast and a cup of tea before walking on the wet sand which mirrored the sky above perfectly. What a way to spend a morning. We did toy with the idea of driving Nomad out on the sand but we soon came to our senses and decided it was better to look at everyone else taking a drive than having to dig ourselves out of any sinking sand.

Aripara was the start of beautiful beaches as we headed towards the east coast admiring Doubtless Bay and getting out occasionally to stretch our legs on the white sands. It wasn’t all about beaches so we stopped at Waitangi for a bit of culture and to see where effectively ‘the modern New Zealand’ began.

Our east coast part of our journey we slowed down the pace a little and explored some of the coastal towns of Paihia, Russell and Waipu Cove and of course many more stunning beaches that I certainly could never tire off.