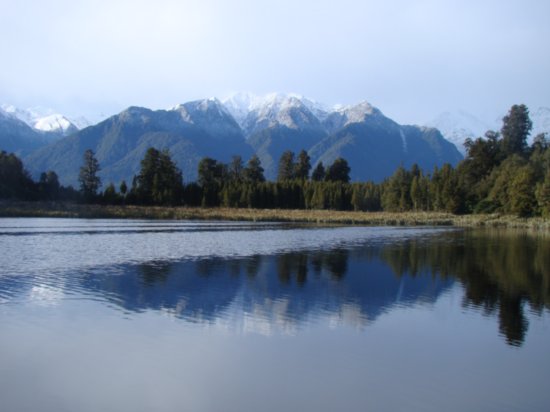 I am sure I have surprised you all by my title being ‘Log fires and DVDs’ when surely I am visiting the most scenic and dramatic part of the south island – the West Coast, aka a photographers paradise with hundreds of picture perfect scenes?

Well I surprised myself that a large portion of my trip did involve curling up in front of a log fire to warm up my cold toes while watching a DVD – a real treat after venturing into the cold and rainy air to get a look at some of the most amazing natural phenomenons! So no I have not become a couch potato during this trip but mealy balancing must-needed relaxation with defrosting. Defrosting from some crazy walks in blustery storms with sometimes visibility just a few hundred meters in front or from unexpected rock or tree root climbing just to get further up a snowy path.

My adventure to the wild west coast started off in civilised fashion with a train ride on the Tranz Alpine express from Christchurch to Greymouth. I had 4 hours in a warm carriage treating myself to a Devonshire (yip in NZ) cream tea for breakfast while starring out the window wondering if the air was as fresh as it looked. I throughly enjoyed my journey on what they call the world’s greatest rail journeys but was just as pleased that I was only going in one direction as it would have made for a long day. As we pulled into the station, Greymouth lived up to it’s name as it loomed in front of us dark, dreary and strangely grey!

The weather never really let up and I did wonder as I headed to Punakaiki if I would actually get to see the Pancake Rocks. Never fear I was told the stormier the weather the more spectacular the blow-holes – forgetting to mention the wetter you will get too. But it was worth the wind and the rain to see these limestone rocks that have been formed by the wind and sea over the past 30million years.

From Greymouth I headed south on the bus to Fox Glacier – the weather was horrible and the bus driver kindly dropped me off at the hostel’s front steps. I was wondering what on earth I was going to do for the next few days but as it happened my decision to stay 3 nights turned out to be the right one as the morning appeared with crystal blue skies. It was a perfect day to make the 12km return walk to Lake Matherson. Fueling my energy over lunch it was back on the walking track this time another 10km to view the Fox Glacier terminal. It was great to look at but I will still say that Argentina would win ‘The best glaciers competition’ if ever they had one.

Clearly my body did not have enough exercise as the next day I went with a fellow traveller to tackle the Mount Fox Walk. It was really tough with some parts having to physically pull yourself over rocks and tree roots to go further upwards. After about 2 and half hours I finally arrived towards the top to see some spectacular views of the alps and coastline. Although this was not the end of the route I decided enough was enough and headed downwards while my friend continued upwards. I can only believe him when he said the view was even more amazing but did involve walking through chest high snow.

Haast was my final destination on the West coast. An extremely scenic place but I was a bit disappointed that once in the township you were limited for choice on what to do unless you had a car and I had so many walks planned to do over the four days! In the end the owners of the lodge lent me a bicycle so I could get around. I also ventured on the river on a jet boat to see the sights – it was very relaxing way to see the river with just a few 360 degree turns thrown in for fun.

My best highlight of Haast was making friends with the locals and being invited to join them for a bonfire on the beach, to eat venison steak sandwiches and to join them in the cover of darkness to go Possum hunting. But don’t worry out of the million of Possums they say have invaded NZ we did not see one. Could it be the fact that 7 giggling ladies singing to the latest tunes warned them of our approach?